In this thread, we can begin learning how to use Tarot together! We can do what Luna suggested which I think is a great idea that allows us all to chime in and learn together.

We will start by choosing a card that we will learn this week. For example, we will be discussing ‘The Fool’ tomorrow.

So throughout today, everyone that has the deck should meditate on the card. Don’t look up its meaning. Just meditate on it, think about it and try to figure out what it means. How does the card make you feel? What is the card saying? There are no right or wrong answers here. Just your subjective perspective on it. Write this down somewhere so you don’t forget.

Then tomorrow, I will post the original meaning of The Fool. And we all paste the thoughts we had on the card the day before! Of course, some of us already know some of the cards but even then… just post your feelings on the card. What you felt while connecting wtih it. What were you thinking about. It’s going to be a nice way of getting a collective experience of these archetypes.

Then throughout the week, we will further connect to the card and write down different ways of percieving it and different thoughts you have gotten from it. And perhaps infuse ourselves with the energy and do things in relation to the cards strengths. We will get to that part together!

This will be a fun way to learn tarot together and also learn to connect more with these cards. Build those bridges with the archetypes. I look forward to learning with you all! 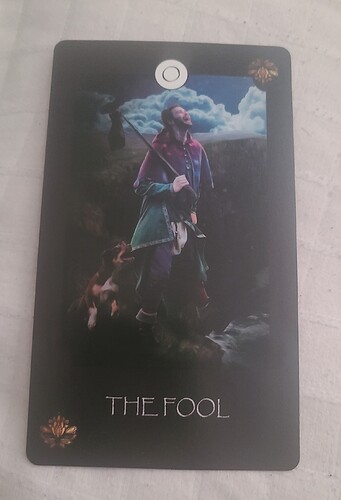 I ask that everyone, beginner and experts alike, meditate on the fool card from their Corpus Spiritus deck. Meditation can simply mean focusing and thinking on the card. Do this for a bit and try to gauge the meaning behind the card. Write the thoughts, feelings that arise from within while meditating on it. Any thoughts that come up really, even if they seem unrelated. Write your thoughts down on your phone, notepad or wherever.

Then tomorrow after the original meaning is posted, everyone post your initial thoughts/feelings! It’ll be interesting to see how our feelings/thoughts allign. What it all means. And how we can connect even further

In our new Beginner Tarot Thread or Tarot Category,maybe you could share what you see that is brutal about your card?

From what I gather (and from the picture) I interpreted the Eight of Swords to mean being (literally or metaphorically) imprisoned.

This one here focuses on one at a time per week.

This fisrt week is the fool.

So its all about the fool, follow the instructions Sammy gave in the OP and have fun!

And if he’d like he can move the 8 of Swords conversation to a new thread.

But its well explained lol

Yeah, I do explain it in this very thread and the other threads as well.

I don’t know why, I’m not able to move Grittir’s post to the other thread. It’s not letting me. I tried earlier today. I would suggest @gittir post that question in the cards and meanings thread instead. Afterwards, I’ll delete it here.

I cant seem to feel energy of the cards like others do. I guess I’m not sensitive enough.

Have you done the exercise that Sammy suggested in the OP?

You can do the exercise without needing to feel the energy of the card being studied. Just relax and, with a playful and curious attitude, give it a whirl. In fact, if you can, give it a few whirls (remember, playful

) before Sammy posts his next post with the meaning.

Does not worry about danger he ventures ahead. No fear of what may lay ahead.

i did. i probably cant relax. ill try breathing.

Held the fool between my palms, and at first it felt like chaotic mess, thoughts of random events came to mind.

Soon I realized I was near a cliff and the fool was there, he put his arms around me and as I heard the words “hahaha, thy should not worry” as he walked with a big smile on his face.

The Fool is frozen in time. It doesn’t matter that he’s about to walk off a cliff, he is immensely happy! He will never walk off that cliff, either. Whatever happens, joy! It doesn’t matter what the situation is, it’s our reaction to it.

Guess i jumped the gun on this one. Sammy hasn’t posted the meaning yet.

Or will a bridge appear just as he steps off?..or he grows wings…

Either way, the journey begins. 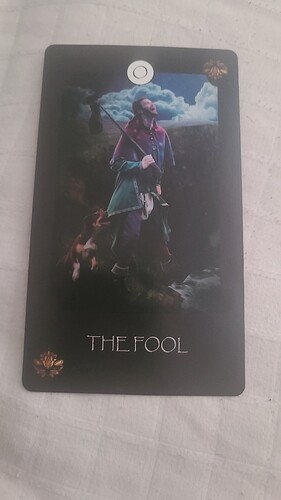 The Fool is numbered 0 – the number of unlimited potential – and so does not have a specific place in the sequence of the Tarot cards. The Fool can be placed either at the beginning of the Major Arcana or at the end. The Major Arcana is often considered The Fool’s journey through life and as such, he is ever present and therefore needs no number.

On The Fool Tarot card, a young man stands on the edge of a cliff, without a care in the world, as he sets out on a new adventure. He is gazing upwards toward the sky (and the Universe) and is seemingly unaware that he is about to skip off a precipice into the unknown. Over his shoulder rests a modest knapsack containing everything he needs – which isn’t much (let’s say he’s a minimalist). The white rose in his left hand represents his purity and innocence. And at his feet is a small white dog, representing loyalty and protection, that encourages him to charge forward and learn the lessons he came to learn. The mountains behind The Fool symbolize the challenges yet to come. They are forever present, but The Fool doesn’t care about them right now; he’s more focused on starting his expedition.

The Fool represents new beginnings, having faith in the future, being inexperienced, not knowing what to expect, having beginner’s luck, improvisation and believing in the universe.

Whilst you’re enjoying your exploration and contemplation of the card and waiting for Sammy’s undoubtedly wise post, a couple of questions you might like to play with:

What’s the intention of the dog or what is the dog trying to do? Enjoying the journey. Staying in the moment

That was fun. Thanks, @WellBeing!

I just remembered something else, well almost. Hoping I will remember by writing this out. Those of you who are used to my explorations might laugh, as parts of my intuition come alive while writing. I was taking a walk yesterday, thinking about the card. I kept telling myself I was supposed to write it down, but didn’t. One thing I remember that unless I missed it there is air, earth, and water but no fire in the Fool card. Perhaps his fire is burning inside of him. Maybe his zeal for the journey is what motivates him. Maybe we can call for his fire within to propel us ahead on the journey. Okay, that wasn’t it, but it is something. Will have to revisit it later.

And I can for sure use that fire. I’m a water sign (glug glug) although I think I have Mars in the first house. Fire, Love, Joy.

I’m curious, into which of those 4 categories that you wrote about, would you classify the light that The Fool is looking up to?